Use Our Content This story can be republished for free (details). LOS ANGELES — Some of Southern California’s most iconic destinations were deserted Monday. There were no tourists trying to fit their palms into Marilyn Monroe’s handprints at the TCL Chinese Theatre, no shoppers on Beverly Hills’ Rodeo Drive and […]


This story can be republished for free (details).

LOS ANGELES — Some of Southern California’s most iconic destinations were deserted Monday. There were no tourists trying to fit their palms into Marilyn Monroe’s handprints at the TCL Chinese Theatre, no shoppers on Beverly Hills’ Rodeo Drive and shockingly few cars on LA’s famously gridlocked freeways.

Gavin Newsom on Thursday became the first governor in the nation to order nearly all state residents to stay at home and most retail businesses to close their doors to stem the spread of COVID-19.

Newsom doubled down on his order Monday, ordering some state park parking lots to close after stir-crazy Californians thronged to parks, beaches and hiking trails over the weekend, making “social distancing” nearly impossible, even outdoors.

More than 4 million visitors from around the world visit the TCL Chinese Theatre every year. But there was no foot traffic in front of the Hollywood landmark Monday afternoon.(Heidi de Marco/KHN) 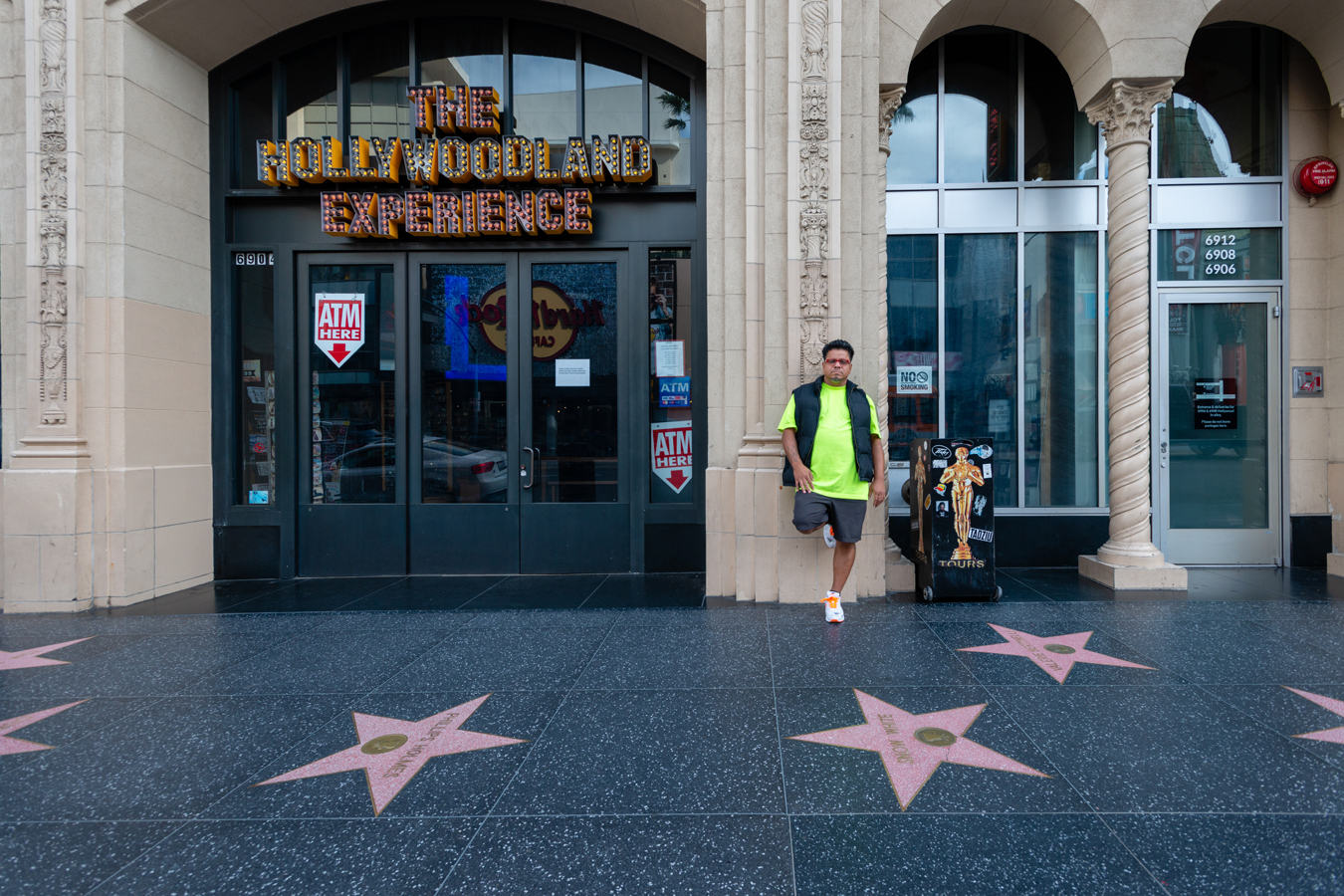 Pedro Castro, 40, sells tourist bus tour tickets on Hollywood Boulevard. Castro usually books about 20 tours a day, he said, but after the shutdown, he sold only three on Sunday and Monday combined. Many tourists, Castro said, are “stuck here and have nowhere to go.”(Heidi de Marco/KHN) 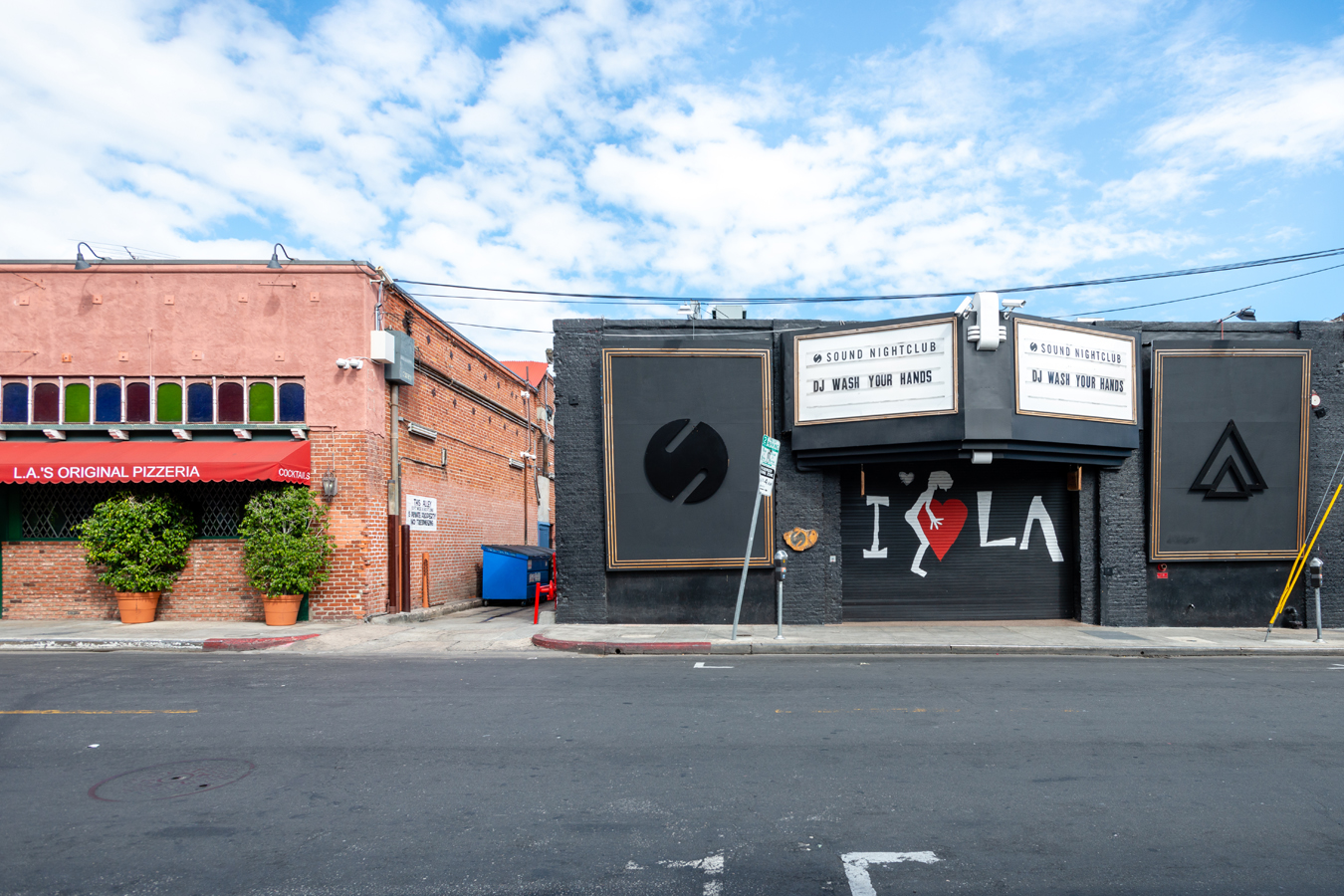 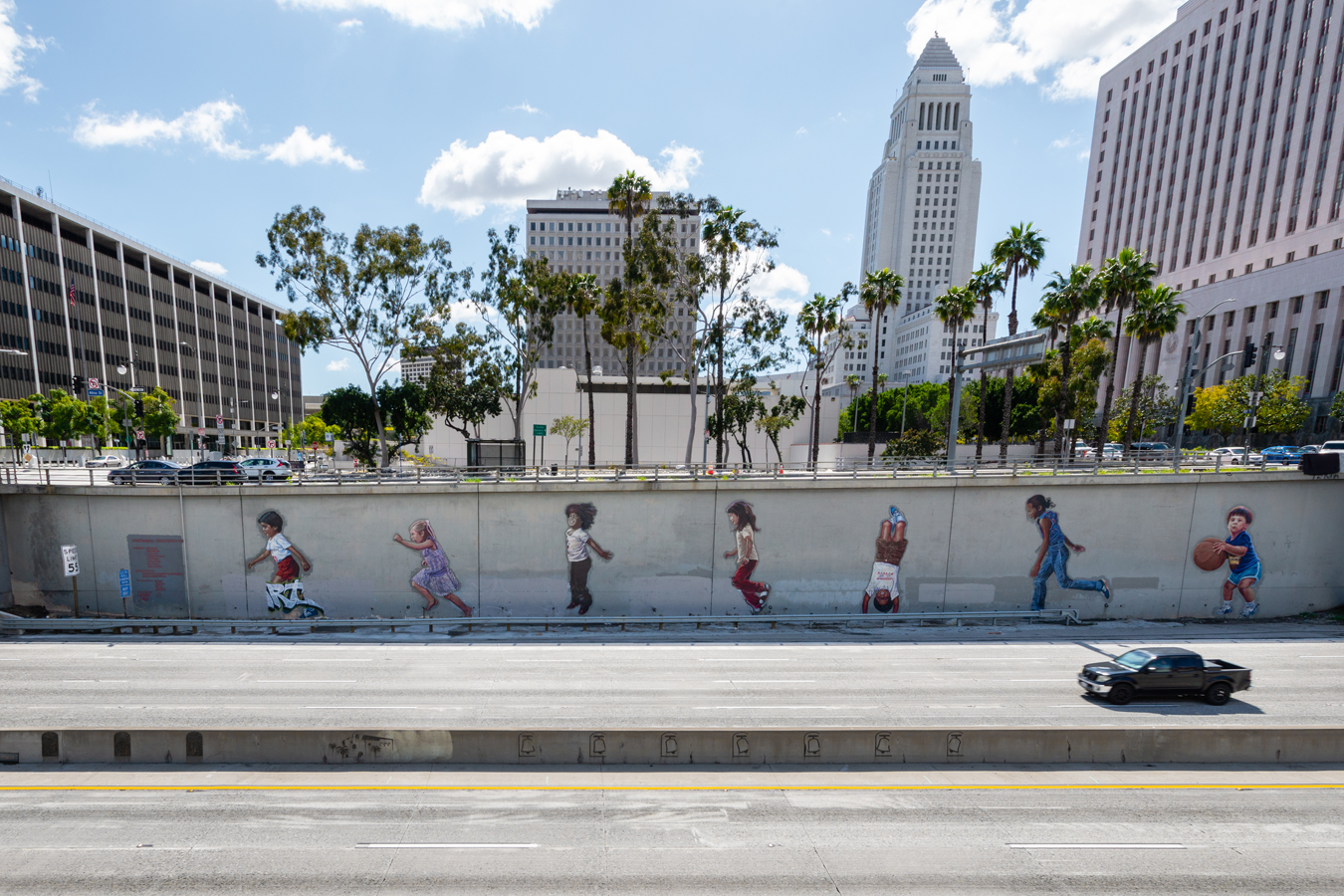 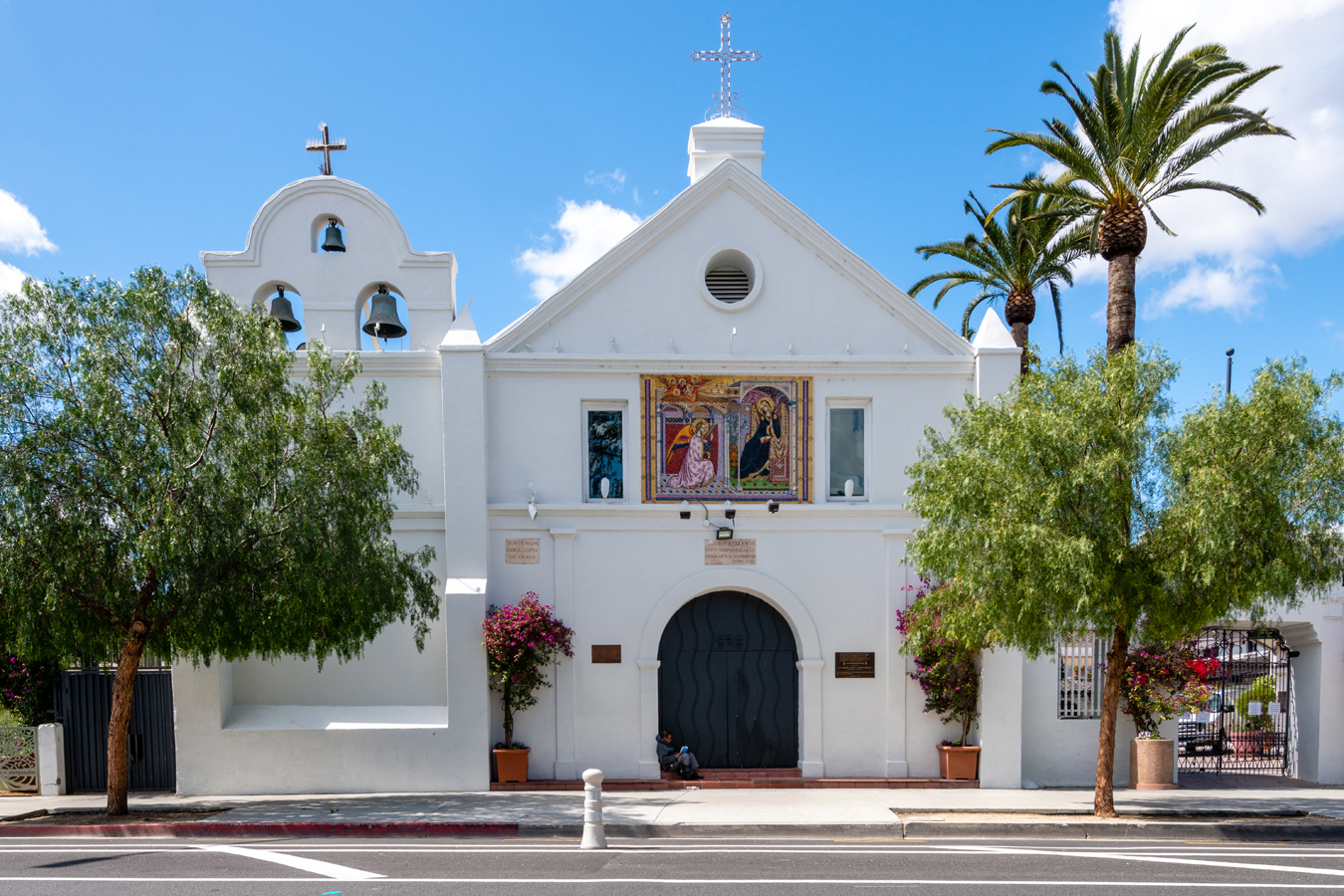 La Iglesia de Nuestra Señora la Reina de los Ángeles (The Church of Our Lady Queen of the Angels) is a historic Roman Catholic church in downtown Los Angeles. The church, which no longer offers daily Mass because of the novel coronavirus, is usually overflowing with congregants, many of them immigrants from Mexico and Central America.(Heidi de Marco/KHN) 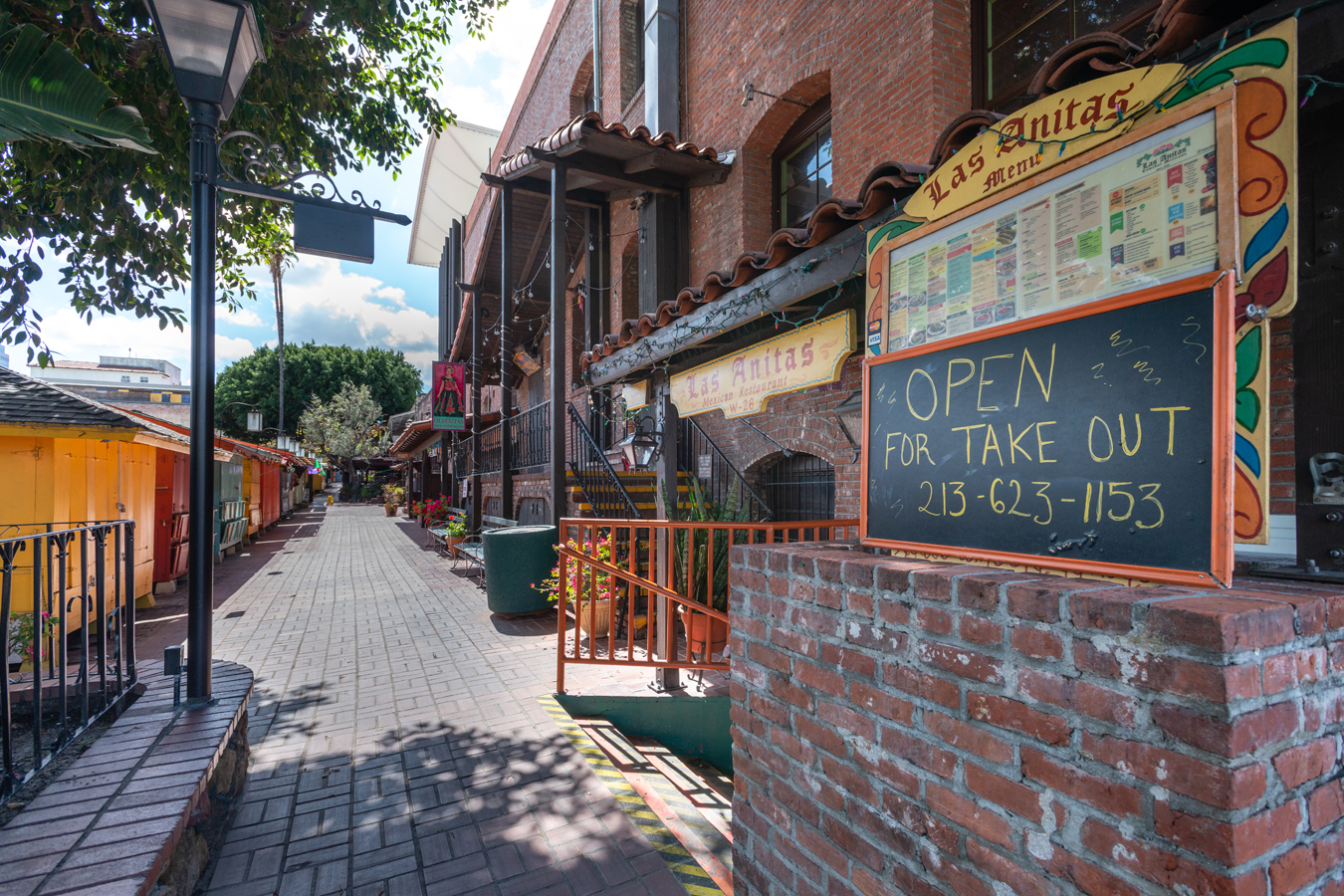 Olvera Street, a historic district downtown, is home to a Mexican marketplace that is a popular attraction. But all shops and most restaurants are now closed.(Heidi de Marco/KHN) 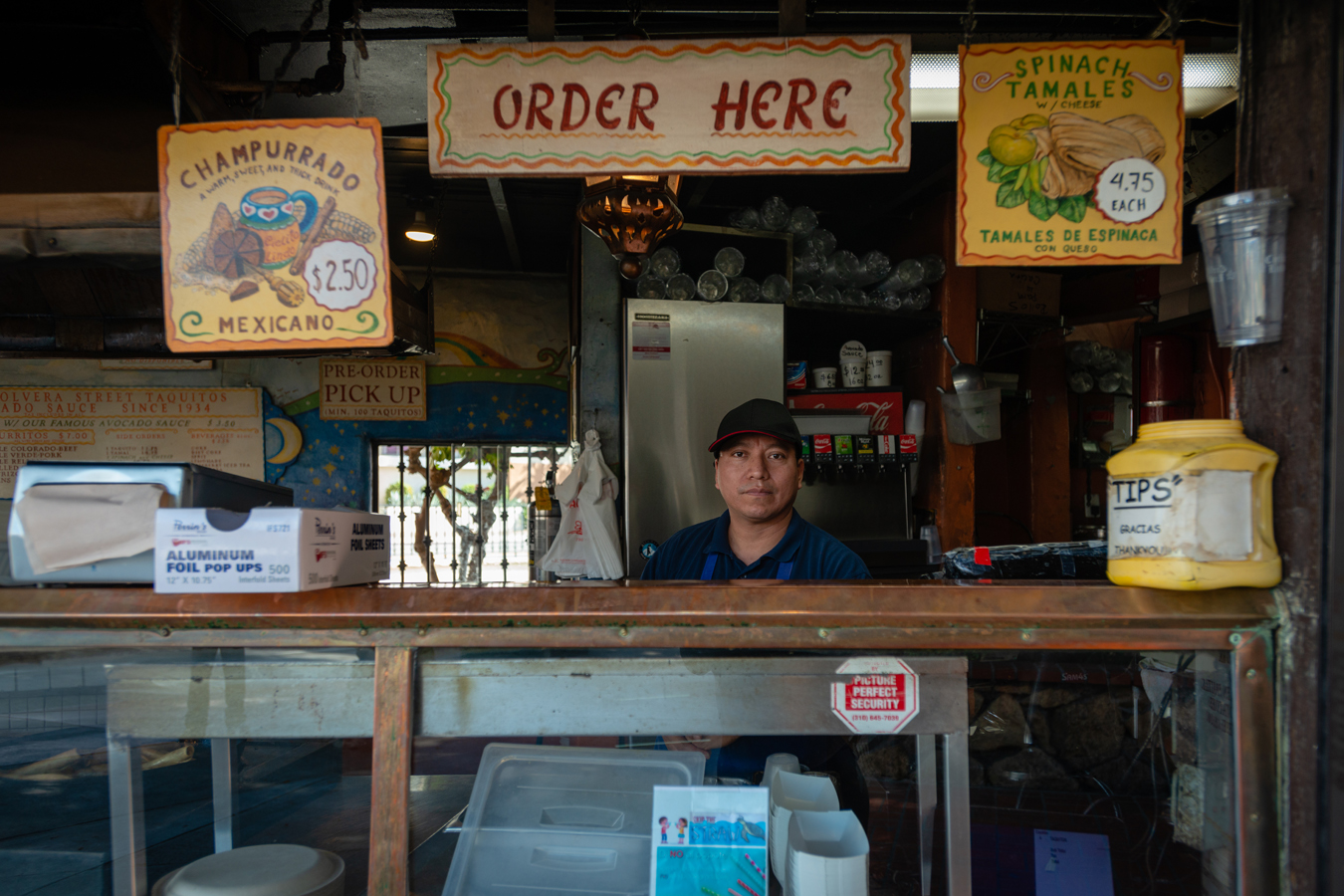 Ricardo Gaytan, a cook at Cielito Lindo on Olvera Street, said the takeout window is open. But with only a few customers a day, the restaurant may close completely, he said.(Heidi de Marco/KHN) 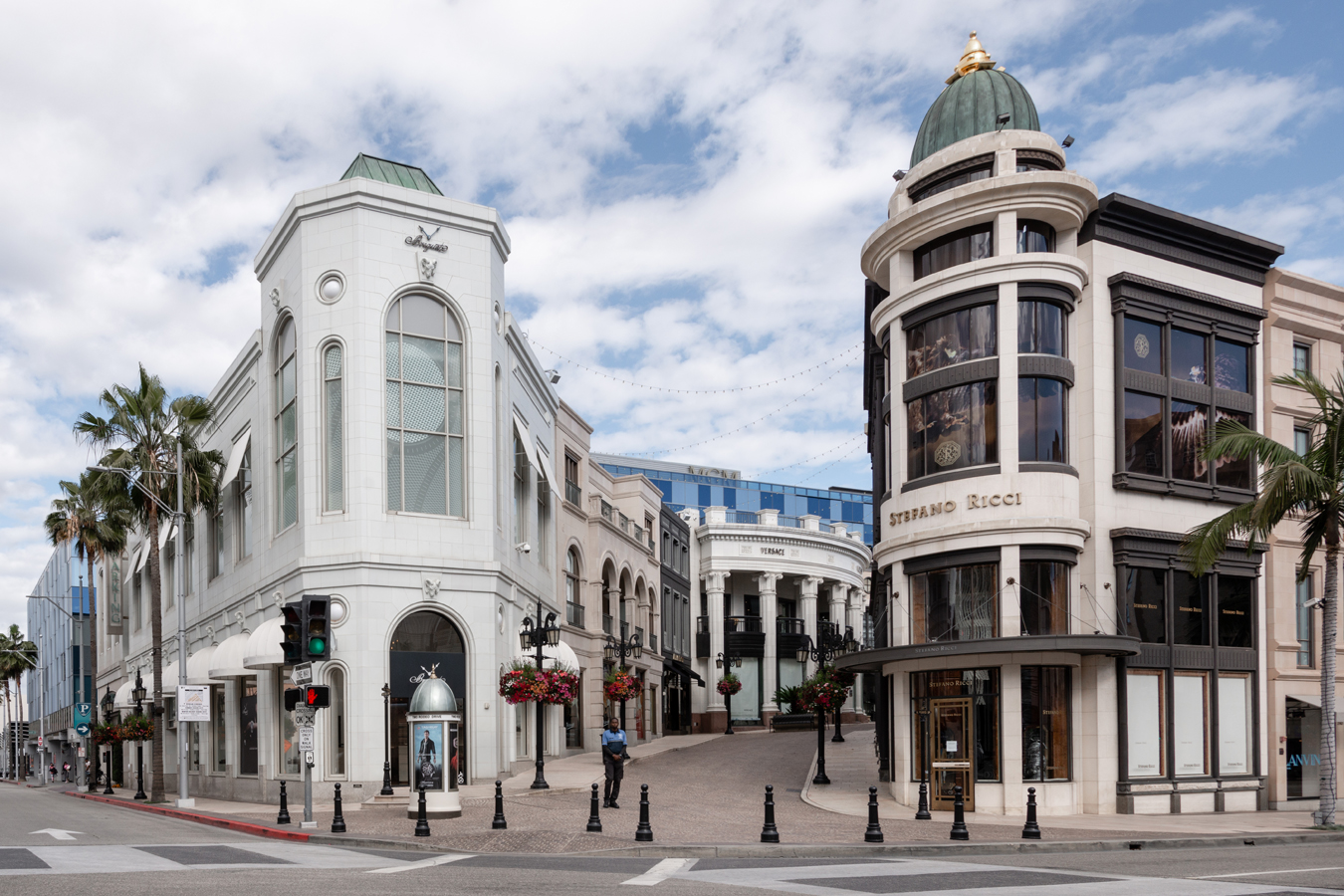 A guard stands at the entrance of the Rodeo Drive Walk of Style in Beverly Hills, which is now closed to the public.(Heidi de Marco/KHN) 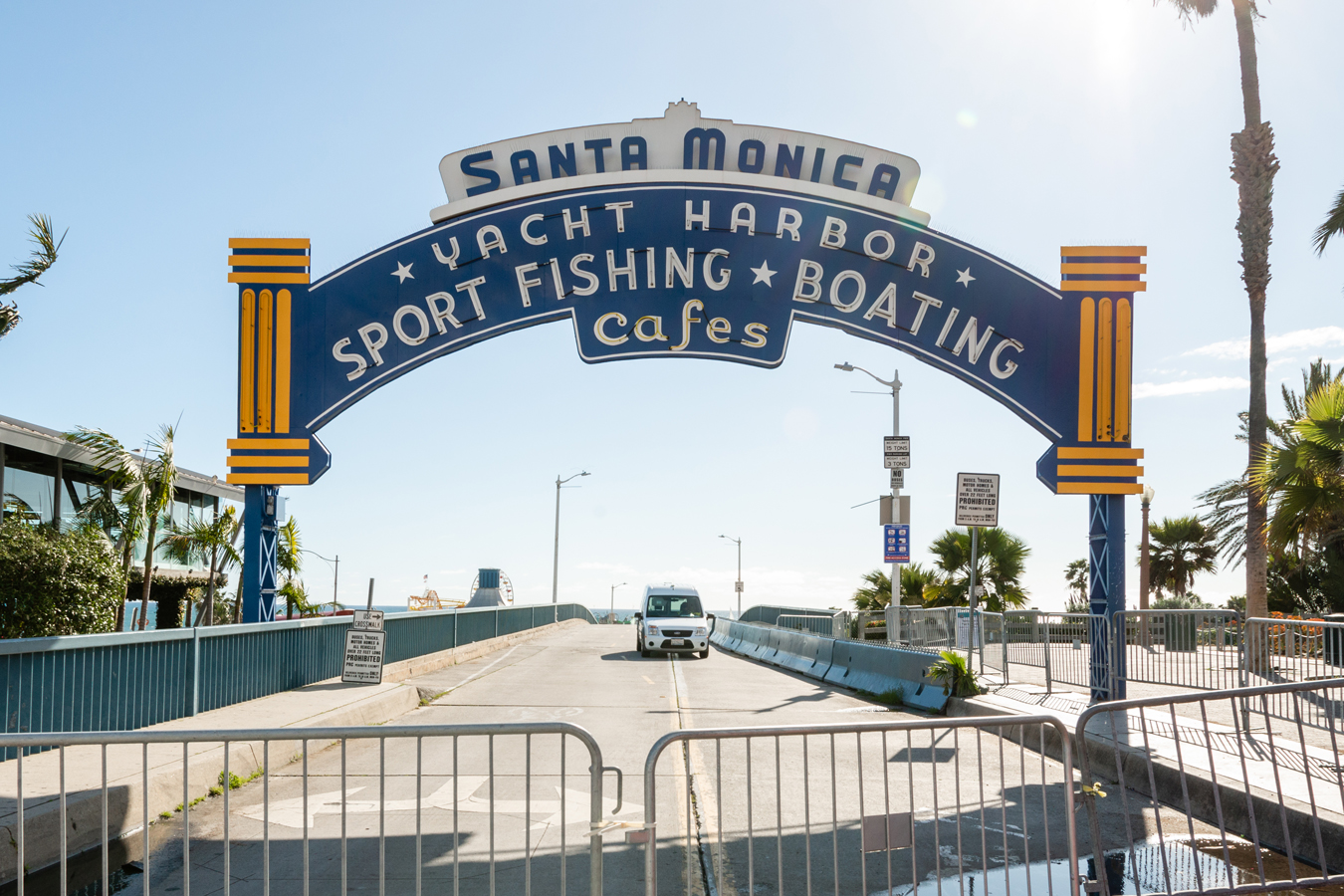 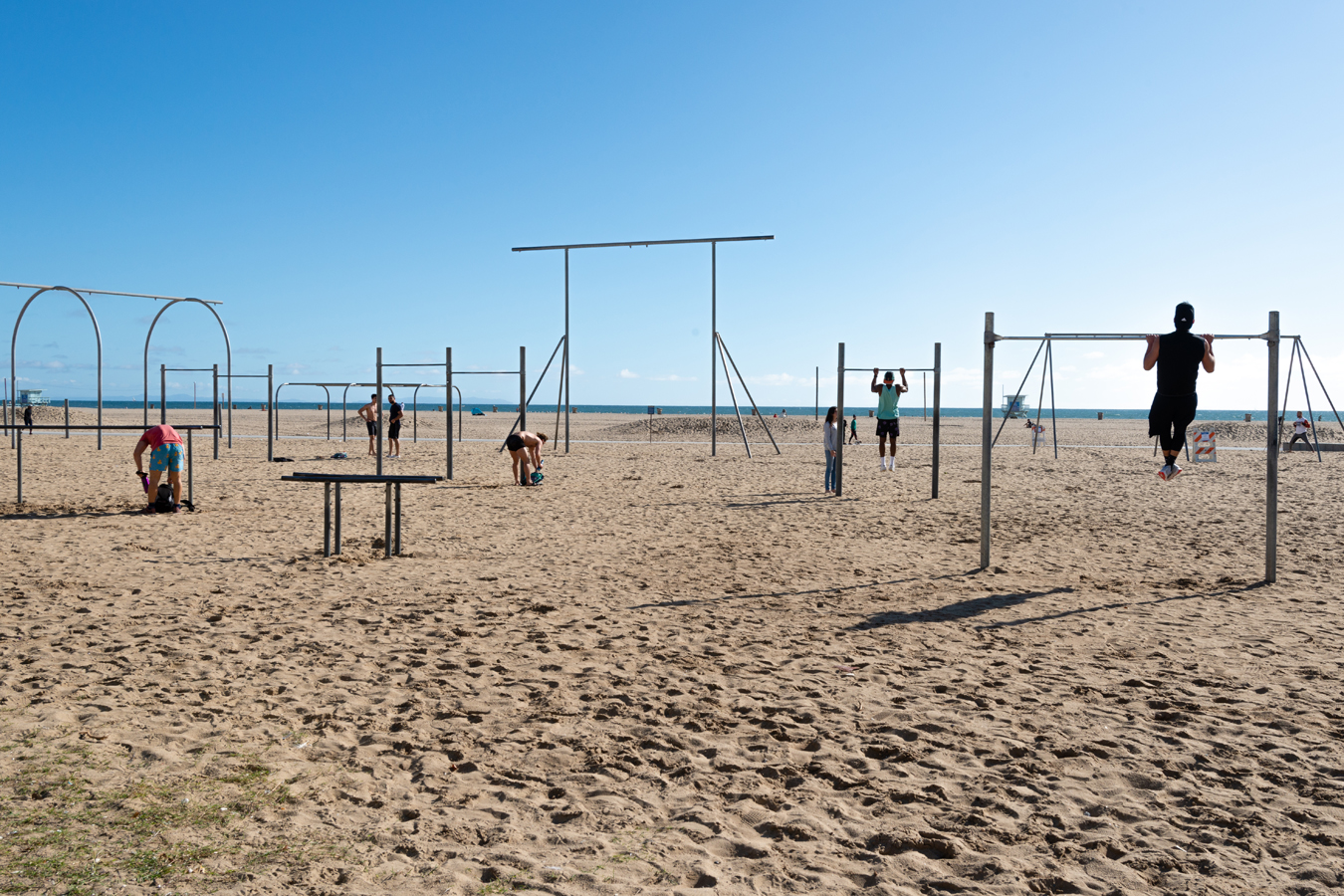 A handful of people work out on the beach in Santa Monica Monday afternoon. The beach remains open.(Heidi de Marco/KHN) 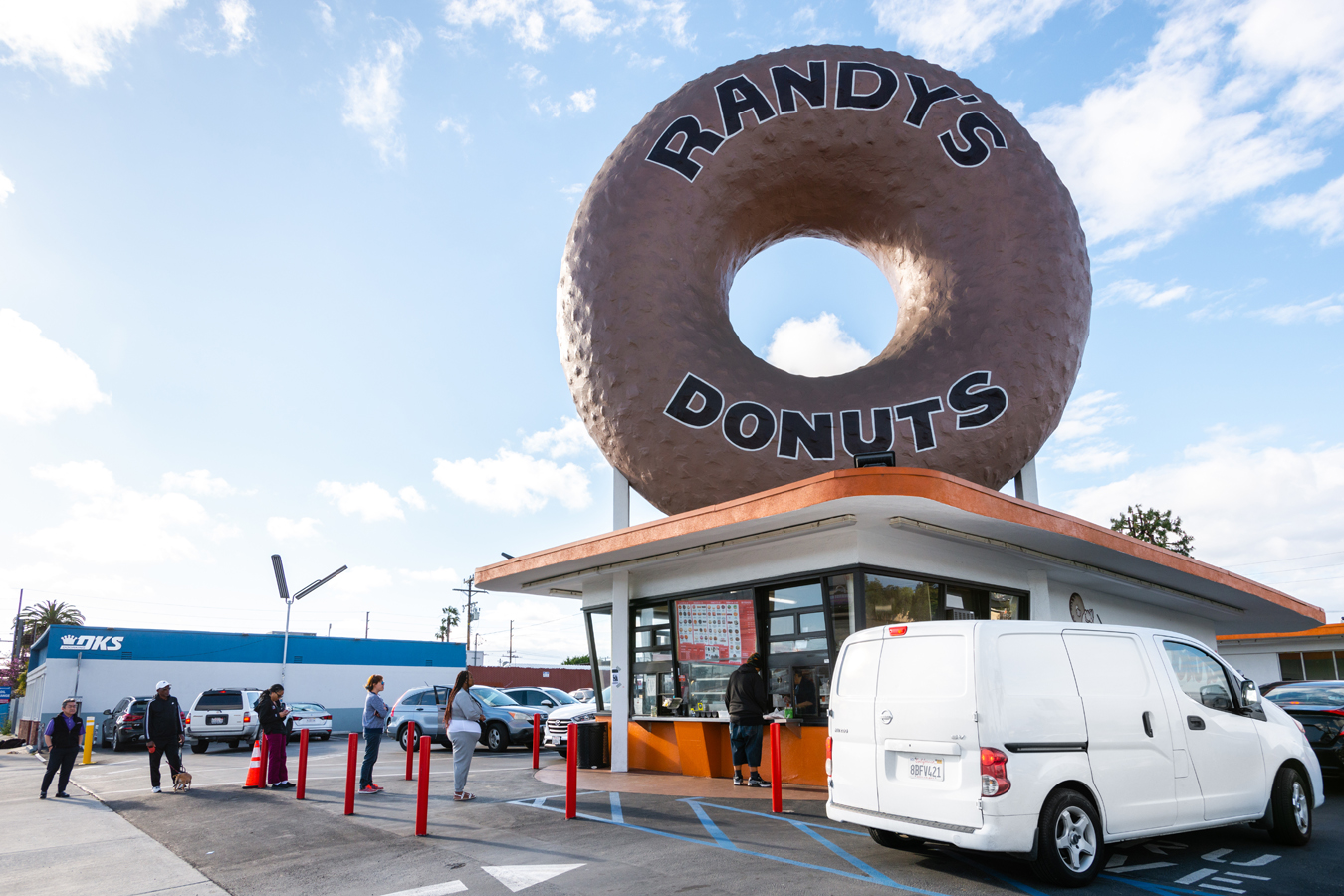 Customers line up at Randy’s Donuts in Inglewood, near Los Angeles International Airport, but they leave some distance between themselves.(Heidi de Marco/KHN)


This story can be republished for free (details).